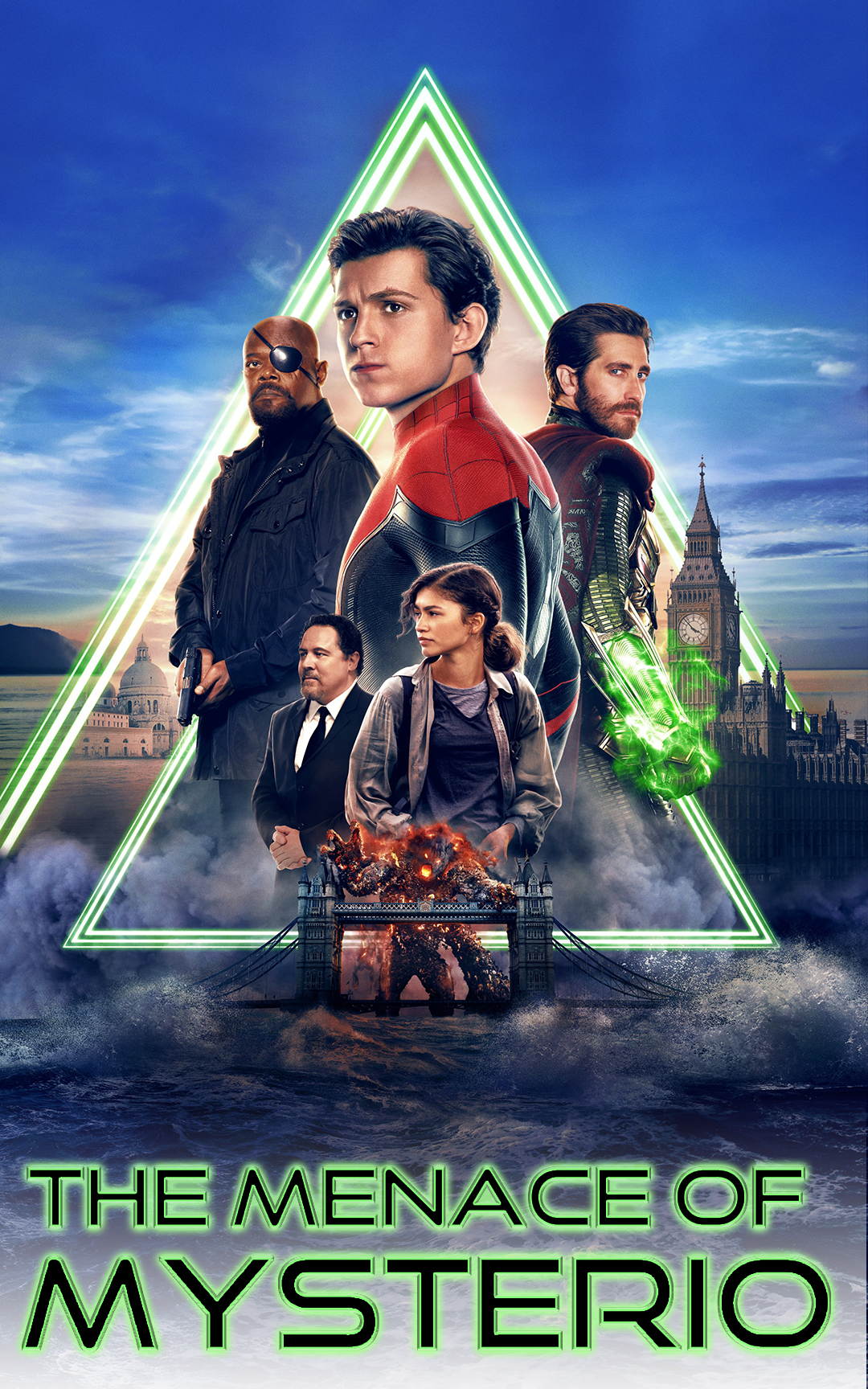 Less than two years after making his first appearance in the pages of Amazing Fantasy, Stan Lee and Steve Ditko’s wall crawling hero was proving quite a hit for Marvel. In his own title, The Amazing Spider-Man, Spidey had gone toe to toe with a colorful rogues gallery, facing off against the likes of the Vulture, Dr. Octopus, Sandman, the Lizard, Electro and even the Fantastic Four's arch foe, Doctor Doom. In 1964, inside the pages of the book's thirteenth issue, however, Spider-Man would meet his match with a foe teased on the cover as being the webhead's greatest villain: Mysterio.

Despite being an expert at cinematic special effects, Quentin Beck had failed to find success in Hollywood, deciding that his skills would be better suited embracing a particularly devious life of crime. Outfitting a costume with all sorts of mechanical tricks, Beck was able to fake most of Spider-Man's incredible abilities and frame the webslinger for a series of robberies. Then, taking up the identity of a crimefighter named Mysterio, Beck appeared the hero himself as he publicly promised to bring Spider-Man to justice.

At first, Beck's plan worked perfectly, driving poor Peter Parker to believe that he may have developed a criminal personality. Fortunately, cooler heads prevailed and Peter was able to confront Mysterio, dodging the master manipulator’s mirages with his inimitable spider sense and managing to get a recording of Beck’s full confession.

Of course, nothing about Mysterio is ever exactly as it seems and, nearly 20 years later, Marvel would reveal in the pages of Peter Parker, The Spectacular Spider-Man #51 that Mysterio had been around even longer than readers had previously been led to believe. The 1981 story retcons Amazing Spider-Man’s second issue, revealing that the aliens that Spidey battles within were really the work of Beck the entire time.

Regardless of where his story truly begins, Mysterio has had quite a long comic book history. A few months after his first defeat at the hands Spider-Man, the foe returned for Spidey’s first annual, teaming with five other bad guys to form the supervillain team known as The Sinister Six. In the decades that have followed, Mysterio has tormented Parker time and again with all manner of bizarre schemes, from faking the death of Aunt May to convincing the wallcrawler that he had somehow been shrunk to the size of an action figure.

Although Mysterio will always be first and foremost associated with Spider-Man, the villain’s comic book appearances have left a sizable impact on the Marvel Universe as a whole. When Kevin Smith and Joe Quesada launched the Marvel Knights imprint in 1998 with a new Daredevil book, Mysterio went after the man without fear, making Matthew Murdock believe that a newborn baby was destined to become the Antichrist. In 2009, Mark Millar and Steve McNiven introduced an alternate future in a story called “Old Man Logan” (A direct inspiration on the acclaimed Logan movie). There, Mysterio was responsible for the death of most of the X-Men, having managed to trick Wolverine into killing his teammates.

Quentin Beck isn’t the only character to have taken up the mantle of Mysterio over the years, either. 1975's Amazing Spider-Man #141 introduced Daniel Berkhart who, tutored by Beck, becomes a new Mysterio before later finding an original costumed identity as the pumpkin headed Jack O’Lantern. More recently, a teleporting mutant named Francis Klum has also donned the iconic fishbowl.

Although Jake Gyllenhaal’s role in Spider-Man: Far From Home marks the first time that Mysterio has been represented on the big screen, the character came very close to appearing in a fourth Sam Raimi helmed Spider-Man film that, for various reasons, failed to move forward. An opening sequence was storyboarded that saw Spidey bringing Mysterio to a police station with the plan being for Bruce Campbell to make a cameo as Beck.

It remains to be seen how closely Far From Home will mirror Beck’s comic book counterpart. In the trailer, he claims to be a hero from Earth-833. Comic book readers will recognize that designation as being an alternate reality wherein erstwhile Captain Britain, William Braddock, wore the webs and later teamed up with Spider-Men and women from throughout the multiverse. It’s possible that Gyllenhaal’s Beck will prove to be a similar kind of superhero, but it’s also just as likely that his claims of interdimensional travel are more mischief from Marvel’s mighty, malevolent master of misdirection, Mysterio. 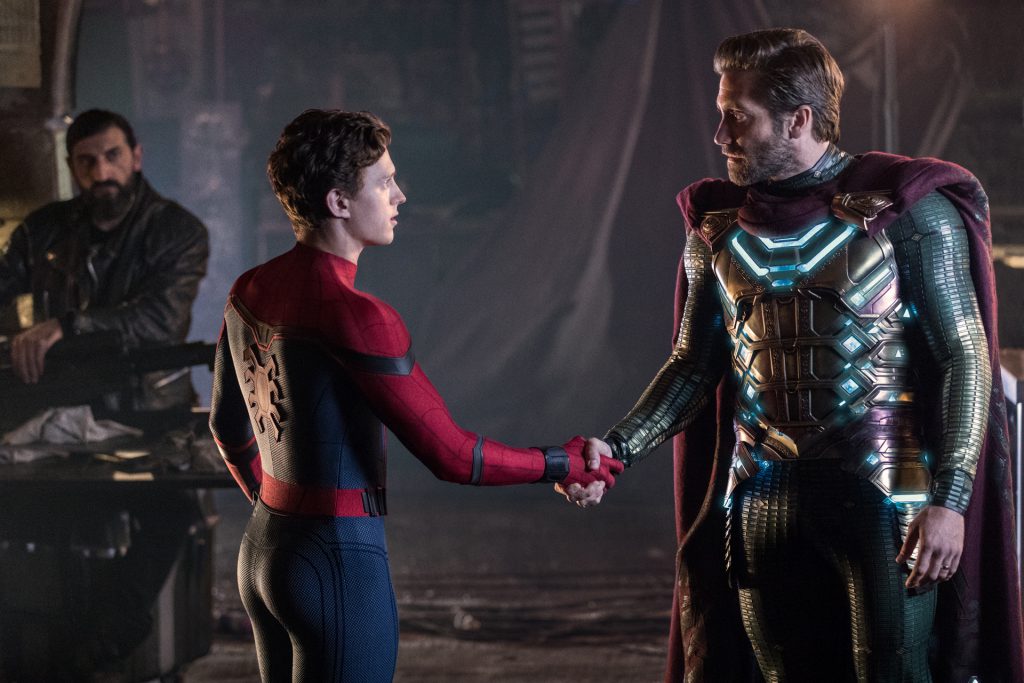 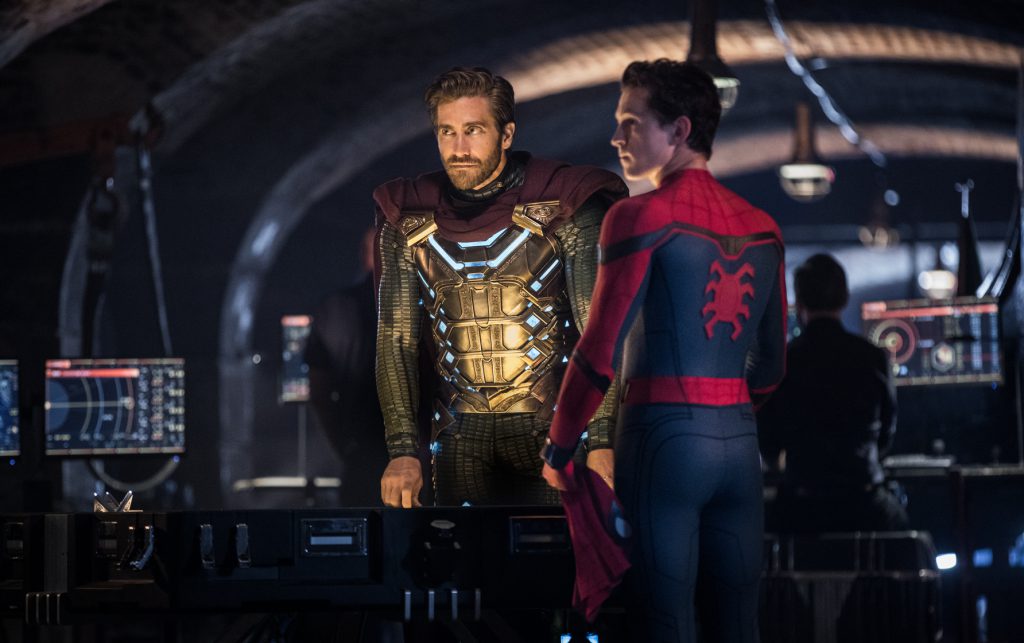 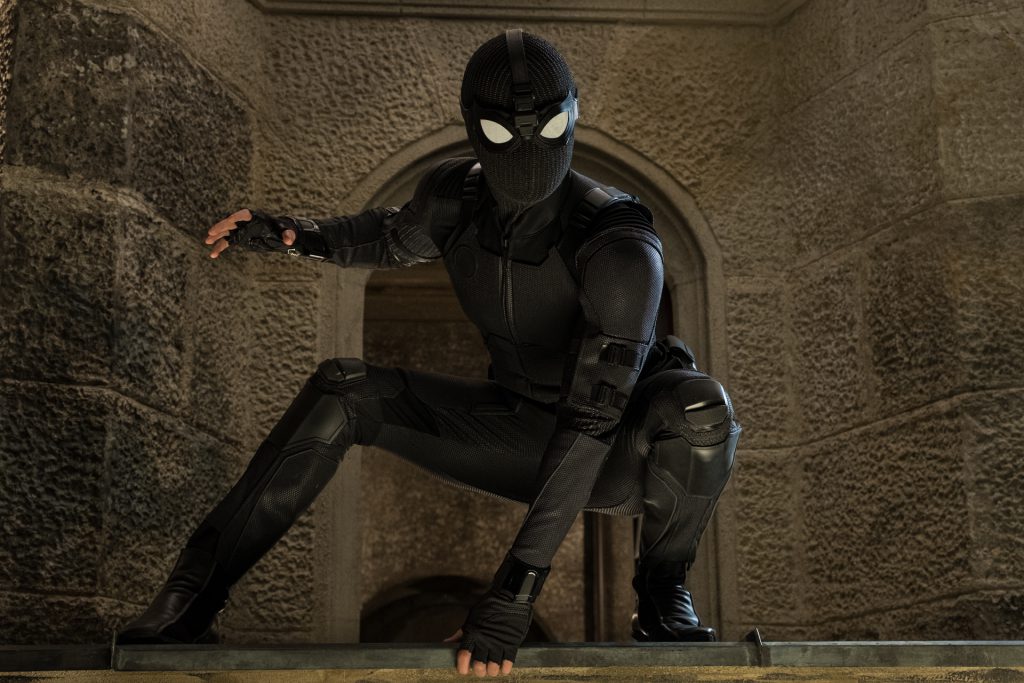 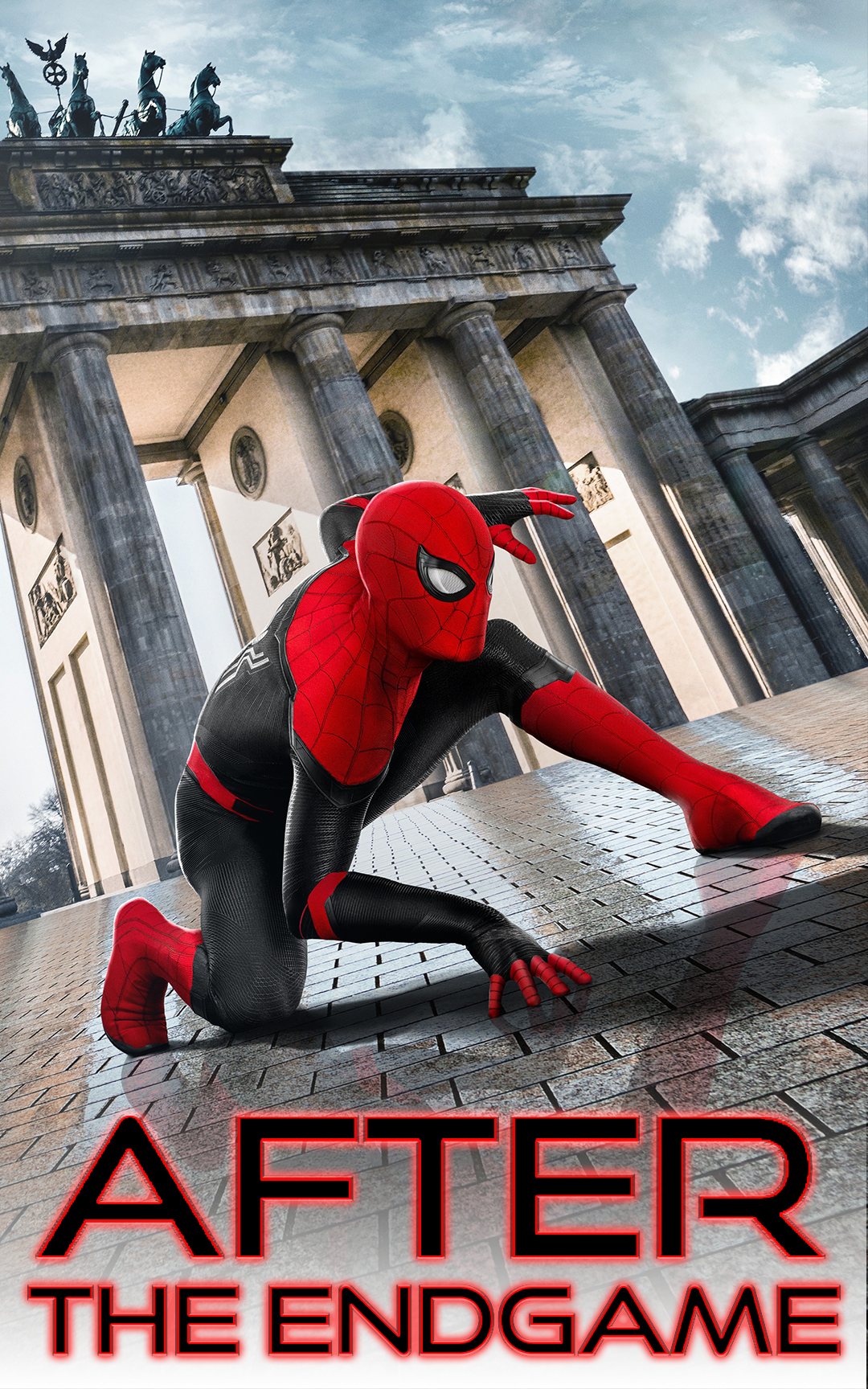 Spider-Man and his amazing friends are about to discover a radically changed MCU.

When Thanos used the Infinity stones to snap away half of all life in the universe five years ago, Earth became a very different place. But now, following the events of "Avengers: Endgame," everyone who disappeared is back and, from their perspective, no time at all has passed. For Peter Parker (and billions of others), there is some serious readjustment to what is being called "The Blip" as a new age dawns for the Marvel Cinematic Universe.

“They’re all really resilient and dealing with what had happened to them in those five years," says director Jon Watts. "But at the same time, they also have their eyes on the future and are ready to move on."

"Spider-Man: Far From Home" catches up with Tom Holland's Peter Parker and his classmates eight months after "Endgame" as everyone the world over does their best to readjust to everyday life. Although he's still reeling from the loss of heroes like Black Widow, Vision and, particularly, Iron Man, Peter finds solace with many friends that were also snapped away, including Jacob Batalon's Ned Leeds, Angourie Rice's Betty Brant, Tony Revolori's Flash Thompson and Zendaya's MJ.

“We get to know [MJ] better in this film and how she responds to situations that make MJ a little more vulnerable,” says Zendaya. “Peter likes her for exactly who she is, including all the little weird things that make her MJ.”

Although all Peter wants is to take a school trip with his friends (and just maybe reveal to MJ his true feelings for her), Peter is contacted in Europe by Samuel L. Jackson's Nick Fury, who wants him to help out with a mission that could have the fate of the world hanging in the balance.

"Spider-Man can’t be a regular teenager," says producer Kevin Feige. "He has responsibilities toward the world, especially now. So when Nick Fury tracks him down on his summer vacation to deal with a new threat, that’s what Peter will have to face – is he ready to step up?”

“Fury doesn’t care that all Peter wants to do is clear his head and deal with the things Peter had left behind for the five years he’d been away," adds Watts. "Fury is more pragmatic; he built the Avengers and now, years later, he’s rebuilding everything from scratch. His job is keeping the world safe, and Peter is a key figure in that goal... Fury, too, has been gone five years, having been erased with the snap. He’s always been the guy who’s on top of everything, and now he’s seeing a very different world. It’s a situation we’ve not seen Fury in before. He’s no longer the guy who’s in total control."

Much to Fury's chagrin, Tony Stark is seeking to pass along his legacy to the young webslinger.

“Fury has serious doubts about [Peter],” explains Jackson. "For one thing, he still sees Parker as being a kid. Also, Fury is still trying to figure out why Tony Stark chose Parker to follow in Iron Man’s footsteps. Stark gave him a gift, but is Parker worth it?”

Fury’s plans call for Spider-Man to team up with Jake Gyllenhaal’s Quentin Beck (aka Mysterio), a fellow costumed hero who hails from another dimension and who has arrived to safe the MCU from four powerful beings called the Elementals. Creatures composed of Water, Fire, Wind and Earth, the Elementals have already laid waste to Beck’s home dimension.

“Mysterio is a fascinating villain in the comics,” says Watts, “So depicting him here as a hero is definitely something we haven’t seen before. The idea of Spider-Man, Mysterio, and Nick Fury teaming up to take on this global menace was really exciting to us… We needed someone who could easily slip into the role of a super hero and, possibly, the world’s next lead Avenger. We knew Jake could carry that weighty responsibility.”

“It was incredibly important to us to bring an actor of Jake’s intelligence, who carries wit and depth, to the role,” adds producer Amy Pascal. “As much as we talked about Mysterio in a practical way – like how his powers would work in the movie – when Jake got involved, he brought a new level of humanity, unpredictability, and humor to the character.  There’s always a desire to bring actors we all love from other films into this world, and Jake’s a great example of the kind of character an actor of his caliber can bring to life.”

“Beck, who feels like a stranger in a strange land, sees Peter as a potential ally and teammate,” says Watts. “At the same time, Beck realizes that Peter is also a dorky teen who’d rather be on this big field trip and vacation than save the world.”

Although “Far From Home” marks Gyllenhaal’s first appearance in a comic book adaptation, he has a close history with the “Spider-Man” franchise. When a back injury nearly prevented Tobey Maguire from reprising the Parker role in Sam Raimi’s “Spider-Man 2,” Gyllenhaal was eyed as his replacement.

“Beck empathizes with Peter’s reluctance to enter the fray,” says Gyllenhaal of his take on the classic Spider-Man foe, “but points out that the task, no matter what the danger, comes with being a super hero.” 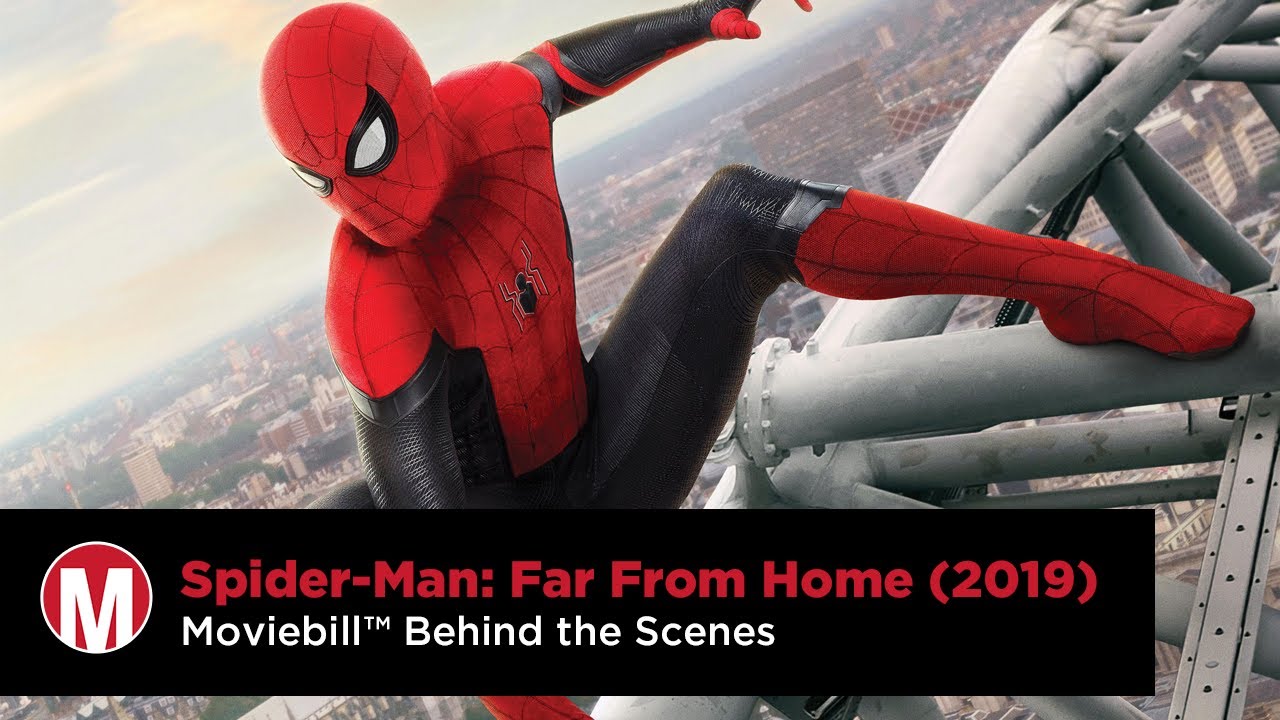 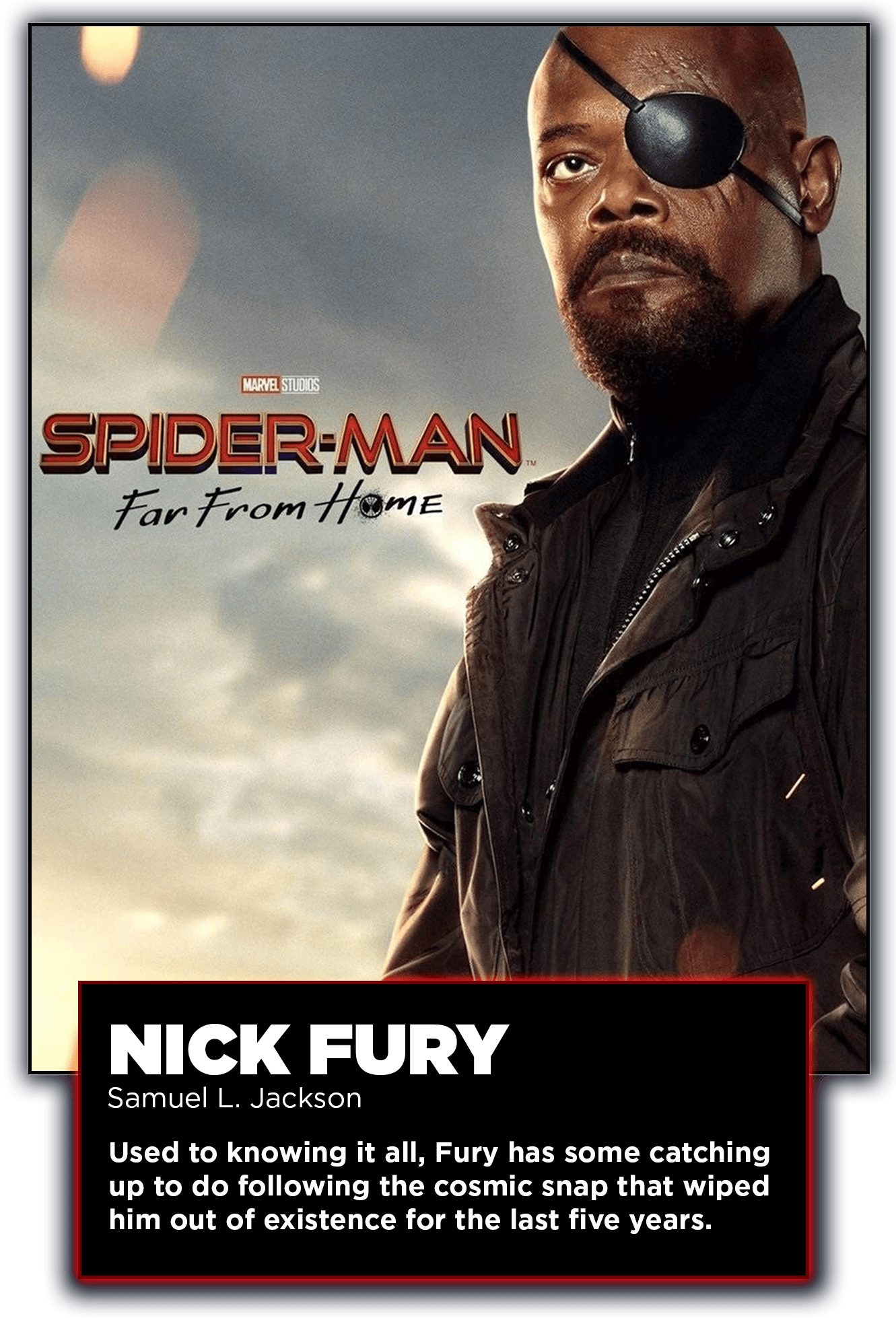 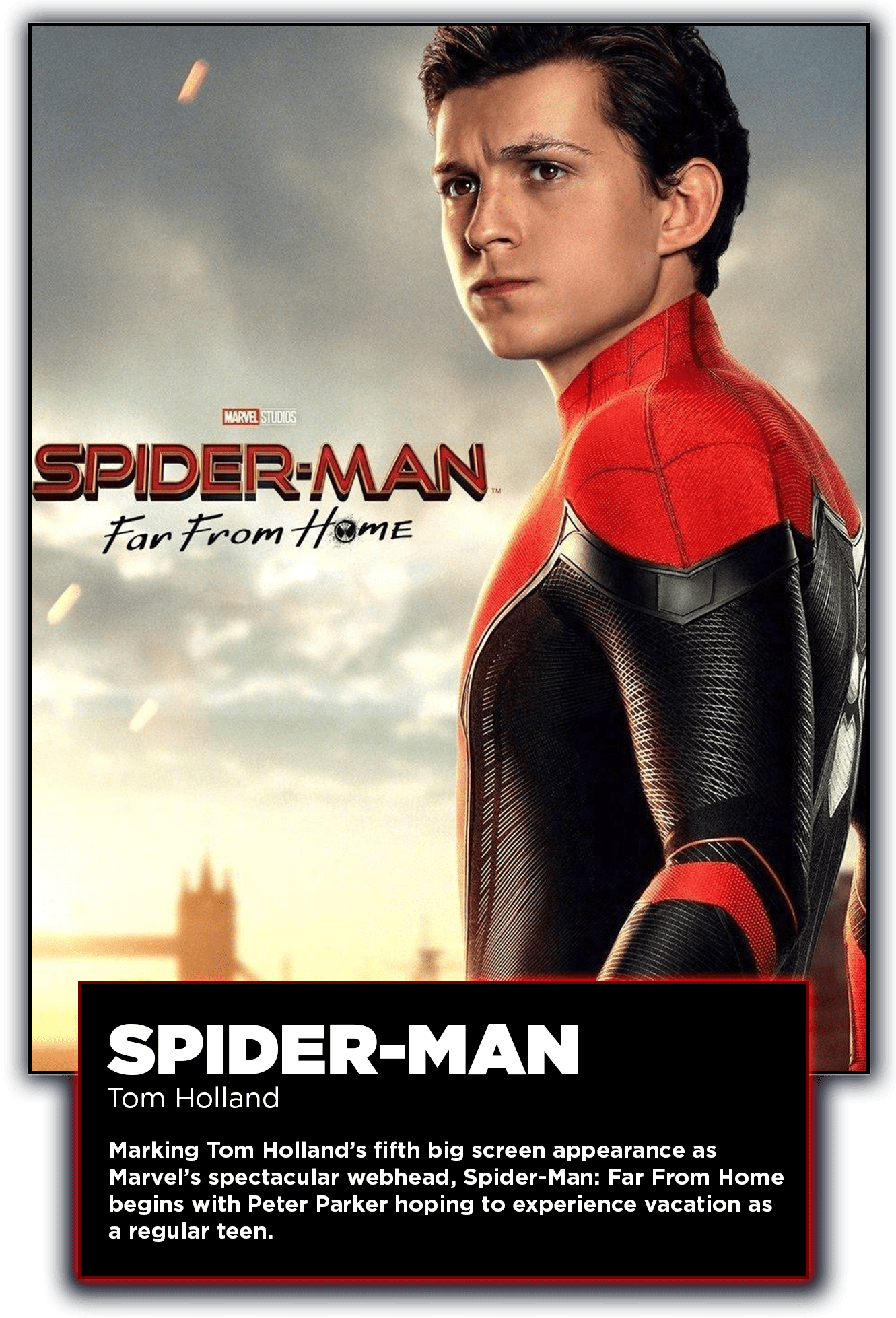 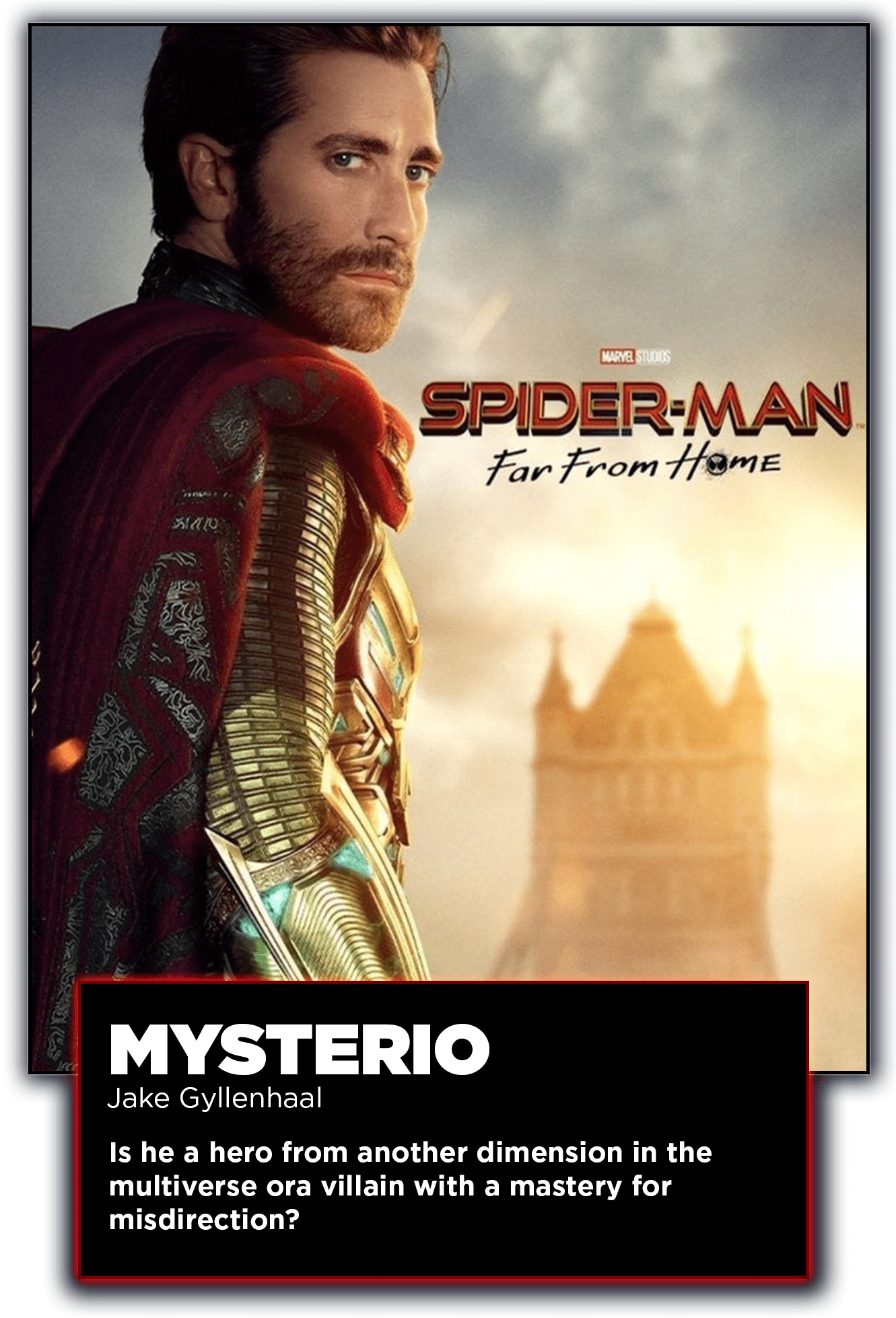