Take a stroll through any city in the world and, whether you’re aware of it or not, you’re tracing paths that belong to history. That’s doubly true in Los Angeles where, thanks to the unparalleled magic of movies, those paths touch not only reality, but dreams themselves. 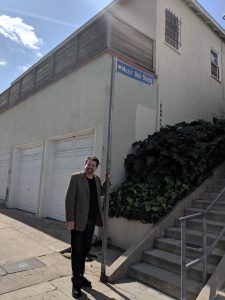 With Sony Pictures Classics‘ “Stan & Ollie,” debuting on blu-ray this week, director Jon S. Baird offers an intimate, loving tribute to the timeless genius of Stan Laurel and Oliver Hardy. As many smiles as the film has to offer, however, there are also strong shades of melancholy as the duo, perfectly portrayed by Steve Coogan and John C. Reilly, enter the twilight of their performing years and wonder if their legacy will endure. Thankfully, the existence of “Stan & Ollie” itself serves as a reminder of the power of the pair, so undeniably iconic that they’re somehow recognizable even to audiences that have never seen any of their films. But then again, perhaps their enduring legend is also owed to the super fans. Those who serve as caretakers of Hollywood lore, ready to boost that same echo throughout the ages in the hopes of passing along the same laughs that have meant so much to them.

Meet Stan Taffel, one such Hollywood caretaker. He’s the current President of CineCon, an annual classic film festival that brings audiences all over the world to Hollywood every Labor Day weekend. He’s also a leading member of “The Sons of the Desert,” an international Laurel & Hardy fan club that has been celebrating their heroes for more than six decades. Named for a 1933 feature that saw the pair as members of a fraternal lodge, the real world “Sons of the Desert” are divided into different “tents,” each named for a different film. Based out of Los Angeles, Taffel’s tent is appropriately named for the 1934 feature, “Hollywood Party“. Next month, Sons will gather at the Hollywood Heritage Museum for a night of rare cinematic delights and a chance to interact with cinephiles young and old. In celebration of the home release of “Stan & Ollie,” Moviebill joined Taffel and a small group of journalists to explore some filming locations that are still standing, nearly a century later. 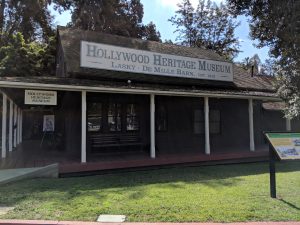 The Hollywood Heritage Museum is itself an important artifact from the origins of Tinsel Town. Now resting on Highland Avenue across from the Hollywood Bowl and open to the public, the building that houses the museum is the Lasky-Demille Barn, one of the very first film studios. In 1913, producers Cecil B. DeMille and Jesse Lasky leased the building to begin work on Hollywood’s very first film, 1914’s DeMille directed “The Squaw Man”. A decade later, the barn was moved to United Studios, which would later become the Paramount Pictures lot. It was then in the early 1980s that the barn was purchased by Hollywood Heritage and relocated to the place where it stands to this day. Any Laurel & Hardy fans would be encouraged to visit immediately, as a current exhibition offers some rare treasures personal treasures from both men, including handwritten correspondence between the two. 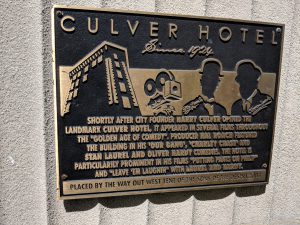 From Hollywood, the tour traveled west to Culver City. That’s where producer Hal Roach began his studio in the early 1920s, working with talent like Laurel & Hardy, in addition to performers like Charley Chase, Will Rogers and the “Our Gang” kids. Nearby, the famous Culver Hotel anchors today to yesterday, appearing virtually unchanged from its appearance in 1928’s “Putting Pants on Phillip”. There’s even a commemorative plaque on the outside of the building (the spelling, however, is not particularily good).

Around the corner and in every direction, there are roads and buildings that have stood through the ages. Culver City Hall doubled as the titular “County Hospital”  in 1932 and can be seen again during a driving sequence in 1934’s “Going Bye Bye”. Between Culver and Venice boulevards, a single block Main street can be glimpsed in just about any Hal Roach film. Taffel, with a huge smile on his face, tells everyone exactly which bricks can be seen in which films and gleefully shows exactly where to take photos to capture the framing exactly.

It’s all the way on the east side, however, that we journey for the final filming locale and it’s arguably the most iconic. On Silver Lake’s Vendome Street, you’ll find the Music Box Steps. Although the earlier film is tragically lost today, the long, narrow staircase first appeared in 1927’s “Hats Off”. They’re much more famous, though, for their appearance in 1932’s “The Music Box,” wherein Laurel & Hardy battle the impossible climb in an attempt to deliver a piano. 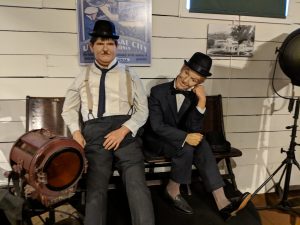 Even though Taffel has clearly visited these places a hundred times, his enthusiasm is in no way diminished and, in fact, seems only bolstered by the chance to share what he loves with new faces. Despite Laurel & Hardy having lived in the past, Taffel is still finding new places to explore.

In September of 1953, just a few years before Oliver Hardy’s death, the duo traveled to Cobh, Ireland. As their boat came into harbor, the bells of St Colman’s Cathedral began to chime with their theme, “The Cuckoo Song”. In that moment, despite their seemingly fading celebrity, Stan Laurel and Oliver Hardy knew exactly how deeply they were loved by their fans. With the anniversary of that event coming up in a few years, Taffel is already planning a trip to Cobh with his wife so that they can hear those notes ring out, just as his heroes did more than half a century ago. Although he admits with a grin that it may seem foolish to plan an international vacation based around a tune that will chime for less than minute, he’s nothing but excited for that minute to come. After all, Taffel’s devotion to what he loves is proof in and of itself that, while some moments pass all too quickly, their echoes can be infinite.